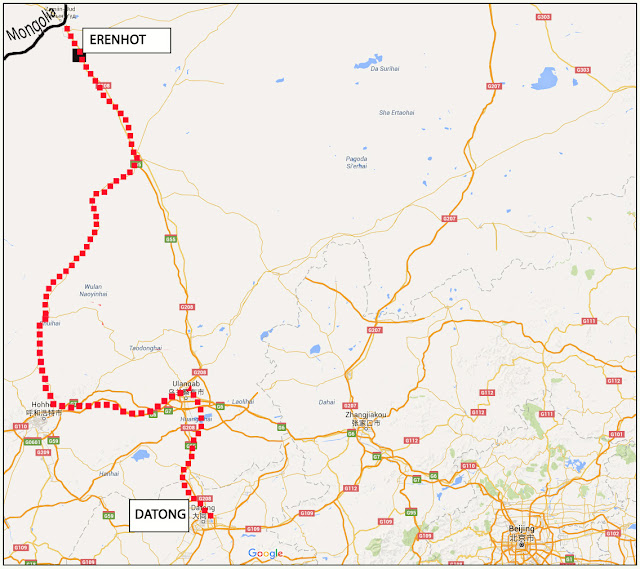 Another day in China.  We were supposed to do 600km but due to military activity in an area we were going to travel, we ended up doing a lot of highway travelling. 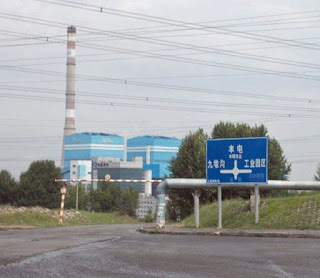 The highways have many toll plaza -  No big deal in the scheme of things but I reckon we must have stopped at up to 10 toll gates today.  The tollways aren’t that heavily used.  The toll stations cater for three or four lanes but only one is ever open.

The highways are really very good.  Two lanes in either direction with everything you would expect in the way of signage, exits etc, except we can’t read most of it.

The countryside has changed from fairly mountainous near Beijing to grassy plains as we near the border.  The soil looks sandy, and sand blows across the road. 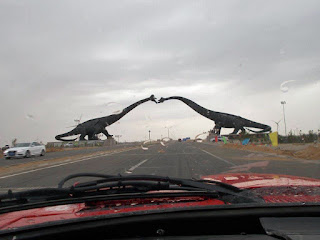 And dinosaurs.  Erenhot is famous for dinosaur remains found there.

On the way into town is a dinosaur arch, and scattered around are dozens of larger-than-life dinosaur models. 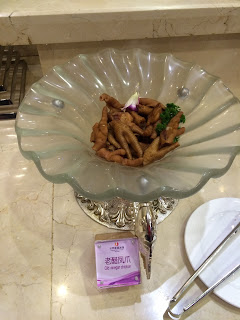 There has been no shortage of food, but Mark still thinks he is losing weight! See pic of the food he rejected. The label says "Old Vinegar Chicken".

It stays light here until quite late but at 4 pm today it was so overcast it looked like it was almost nightfall.It rained quite heavily for a while as we neared the end of today.

Tonight we have to get some Mongolian currency.  First thing tomorrow is the China/Mongolia border crossing then .. who knows?

Tomorrow night is a camping night (hotels being few and far between in the Mongolian countryside), so I may write a blog in the tent but probably won't be able to post it.
Posted by Unknown at 21:16