Early getup, 65km drive to the start at a spot on the Great Wall of China, then an easy day to an early finish at Datong.

No competitive section today so we were tourists.
The start location was a park at the base of the Great Wall where they had a band, acrobats and a Dragon dance for entertainment.

The first car was flagged away at 8:00 am. The early start made for less traffic than usual and the freeways and toll roads we used for the first half of the day were really good. 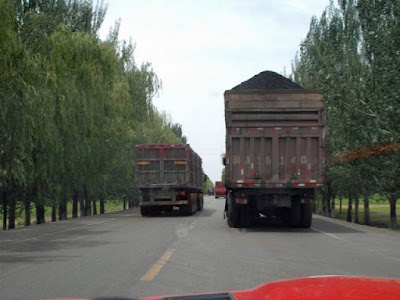 Once off the freeway, things changed.
There are 1000s of big trucks, mostly moving slowly but occasionally they try to pass each other.  Through one village we were stopped at an intersection for about 15 minutes by a traffic jam of trucks.

Lunch was early and since they were allowing cars to book in and leave early, we kept going and finished early, including a stop to look at a local feature at Hanyuan, a hanging monastery.
Our highlight for the day was a police escort to our hotel.  We were two blocks away from the hotel when we turned a block to late.  Normally you could take the next turn right and the next turn left and be back on the right road. But we drove by a police station and were descended upon by about 10 police.  Lots of gesturing and waving until we worked out that they wanted us to follow them.

Tomorrow we travel north to a border town called Erenhot.  Still in China, so no competitive sections.  Tomorrow is 593km.
Posted by Unknown at 20:27