A short day by the standards of the last two days.  Even shorter when the only stage for today was cancelled due to water damage.

They substituted a couple of runs of a local autocross so we had something for the day.

It wasn’t a bad circuit. Perhaps a little rough and you had to stop beside the timing marker to get your time taken.  We did it twice. Two seconds quicker the second time.
However, our Belgian friend Joost, with the Mercedes now firing on all eight cylinders, went five seconds quicker,  but we increased our overall lead over Rob Garnsworthy's Mustang by nine seconds, to 6min 13.

It rained again for some of the day. The tar roads were characteristically rough. We saw one accident.
A large traffic jam in the city forced us to resort to Google to find a way around it.

What I didn’t say is that Google has 'traffic view' which showed where all the traffic was stopped.  We found a new route that was mostly green with only a few red bits.

After booking in we asked the local fixer where we could get a wheel alignment.  He made a phone call and offered a scrap of paper with – I think it's an address (see below).  After travelling a few of Google's red roads, we arrived in the area and tried to ask a few people where this place was.

Eventually we found it.  It was the Nissan Club which I think was a normal Nissan dealer. Boris, who we were told was the contact, seemed rather unhelpful, but while we were deciding whether we really needed a wheel alignment or not, another person, Dimitry, walked up and with reasonable English asked what we wanted.

I’m not sure if Boris rang him but Dimitry had us follow him (he ran in front) for about 300 meters to another building (which looked suspect) and wait while he opened the door. 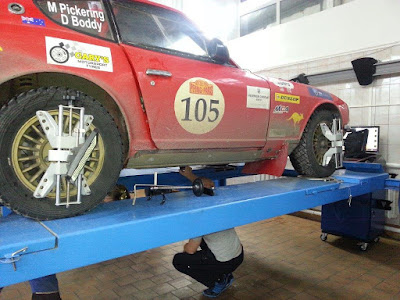 Well inside was a modern workshop with wheel aligners, drills, lathes , milling machines, polished floors and a passion for drift cars.

To shorten the story a little, they made us coffee, did a wheel alignment (we limited it to “just do the toe-in please”) and they examined the rally car while we admired their drift car. 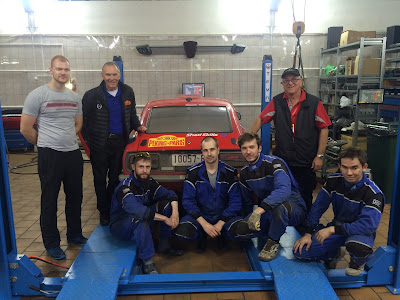 In the end they put their company name on the car and we exchanged email and web addresses.  No cost. They were great guys.

I guess building construction is dictated by the extreme winter weather.  I wonder how many other buildings are really good on the inside with a very drab exterior of thick insulated walls.

Inside the workshop was lovely and warm.