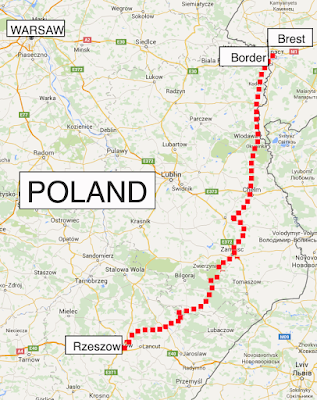 Today was dedicated to crossing the border from Belarus into Poland, and driving the 300-odd km to the town we are now in,  Rzeszow.

The rally organisers separated us into two groups,  EU or Non EU.  The EU guys were told to go to the border at 8am. We were told to leave at 9:00 am

It took 3hrs25min of queueing, waiting, moving up until we finally crossed into Poland at 12:40.pm

Passports must have been checked at least 20 times.
There are separate checkpoints for customs, immigration and vehicle checks for the country you are leaving and the one you are entering.

The Belarus officials were friendly.  The Polish not quite as much.  A bit more officious.

Poland looks green and has lots more land being cultivated than Belarus.  Saw lots of storks nesting on poles but haven’t got a good picture yet (below are photos from the next day's run to Kosice ).

The roads are rough tar.  Not broken up or pot holed. Just bumpy rough.
All the sections scheduled for the next two days (eight of them) are to be tarmac, so I expect they won’t be smooth.

Hotel seems good.  Last night's hotel was pretty close to the worst we have had so far