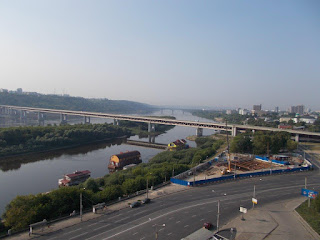 The air conditioner in our room didn’t work when we arrived last night.  Mark complained, and as a result they said they would move us, but we would not be able to share a room.  We had to have individual rooms!  So the picture of our room in yesterday’s blog is the old one.  I didn’t take pics of the new one but I did take pics of the views from the new room.
The other thing I didn’t mention yesterday was police radar., but I believe we have no worries about having fallen foul of any.  The traffic was always slow when near a radar and the flashing of lights by other motorists really is a universal signal for “watch for police”.

The 470km to Zavidovo didn’t include the 40km out to the race circuit which was the first section of the day or the distance done at the circuit, the dirt track or the hill climb we did at the end of the day.

Our run on the circuit felt very slow from the inside.  The new winter tread tyres we fitted at Kazan seemed to be sliding at very slow speed ,and I expected cars on road tyres to be fast.  But I was surprised to be told we were 2nd fastest.  Since cars started in number order (it was the beginning of the day) there weren’t cars  that could be easily caught and passed as has been the case previously.  (Matt Bryson, Gerry Crown's navigator in the P76, jokingly put a water bottle under Mark's accelerator pedal before the start of the circuit lap! see centre photo below)

There was a long drive after the circuit, and road standards are improving as we get closer to Moscow. In fact, we spent some time on four-lane freeway type roads. It was a Sunday, and it was interesting to see locals swimming and playing in the sand on the edge of river and lakes.  The other activity seemed to be picnics/walking in the forests which line many of the roads. 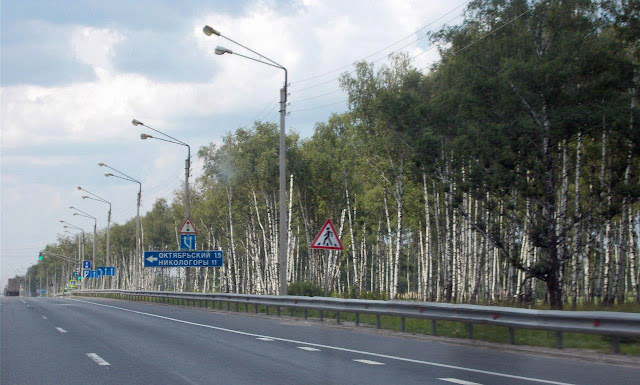 At 5:00 pm we had the 2nd and 3rd “tests” of the day.  The first was a tar circuit and the 2nd a hill climb.  Not a big hill but up and down.  There was a downpour just as we started the dirt circuit but we could still break through thru surface and get dust.  The rain had stopped by the time we started the hill climb but it was still slippery, and steam was rising as the water quickly evaporated.
I’ll have to wait and see the results of today but I’m confident we did OK.  (later: yes, see below) 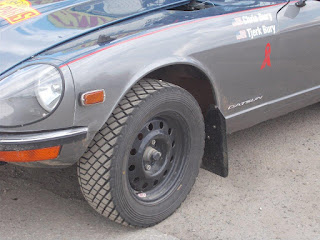 right:  Car 104 decided our discarded tyres were better than his light truck tyres and has recycled them 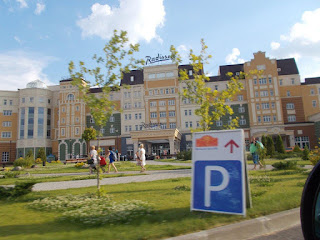 There does seem to be a lot of minor cars accidents.
At least twice a day, we see cards generally still on the road after rear ending each other.  Occasionally, cars are spread all over the place which I think may be the result of overtaking gone wrong.

There are some crazy drivers out there.

We are at a new Radison Hotel tonight. Quite nice, better than last night.