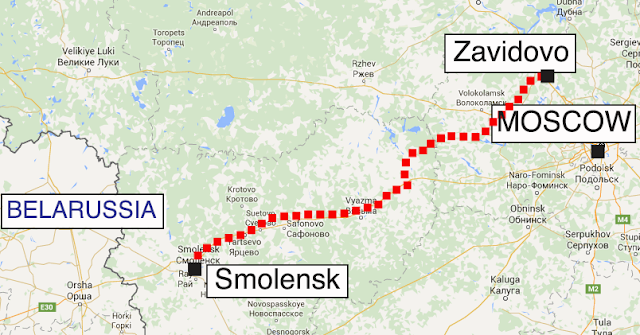 Two tests today.  Both on circuits.  The first was tight and we couldn’t do much with it.  The second was more to our liking, but new rally tyres are not great on the tarmac.  Still I don’t believe we would have lost too much time.
Tomorrow we have to cross into Belarus before the main start control of the day then there is the promise of four gravel sections.  Woo-hoo!  Hope they don’t have to cancel because of rain. 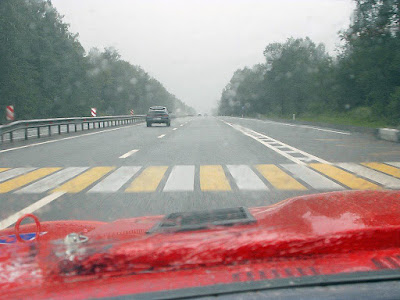 It rained for parts of the day again and the planned route on back roads became impassable and we had to use a good motorway type road for much of the afternoon.

The motorway, with cars doing 110KPH plus, also has at regular intervals, pedestrian crossings!

One small car problem today.  The throttle was not closing as quickly as it should.  Mark found that the bolt holding the bracket that the throttle return spring attached to had stripped its thread allowing it to slip.  He scrounged a new bolt from the ERA mechanics and put a nut on it as well.  Problem fixed.

The other issue causing me grief has been the fuel gauge.  It stopped working at about the time we had the tankful of bad fuel and started to work again the next day.  But – it really only looked like it was working.  The car would seem to not use much fuel and have plenty in the tank then would suddenly start gobbling fuel at an alarming rate.  Today we carefully measured what we put in and stopped a few times to look at the site glass in the boot.  And yes the gauge has been misleading us.  We need to ignore it.

There was an instruction today which read:"Ruined Building at Junction", so I called it, and Mark's sarcastic response was "that will be a change:

Tonight’s hotel is the worst so far.  It has no bar and the restaurant doesn’t look great.  I suspect we will eat out.

Later: Just to finish off,  the hotel didn’t have a bar so almost everyone ended up at a local restaurant which didn’t cope.  It was incredibly slow and incredibly noisy.